COVID-19, Is the difference in the number of deaths with or without BCG vaccination?

COVID-19, the infection in Europe and the United States is tremendously spreading every day. However, the number of deaths in Japan is much lower than in any other countries, and it seems strange from another country. I’ve been thinking about it for several weeks, but I’m not sure what this is from. But one of the reports that came out a few days ago seems to be a big hint. It was a story that BCG vaccination received in the past might be effective for COVID-19. The following is just my idea and has no scientific proof (excuse me).

The number of people infected with COVID-19(the new type of coronavirus infection ) and the number of deaths are surprisingly rising. The situation is disastrous and serious, with 3,170 deaths in the United States, 11591 in Italy, 8,189 in Spain, and 3031 in France (as of March 31).

On the other hand, the number of deaths in some countries is very low. In Europe, such as Portugal and Germany. In addition, extremely low at 56 in Japan, and many wondering if statistics are wrong or whether they are hiding something from each country.

Where does this difference come from? Regarding the spread of infection, the degree of contact infection may differ depending on the lifestyle of each country (such as cheek contact, hugs, and kisses). It is thought that the difference in the number of deaths is related to the quality of medical services including medical facilities. But are there any other factors remained?

When I was thinking about that, I read in the news that “BCG vaccination may reduce the risk of illness.” “It’s worth testing whether BCG vaccination is effective against a new type of coronavirus infection,” said Harvard School of Public Health’s Megan Marie professor.

Also, Professor Masayuki Miyasaka of the Osaka University Immunology Frontier Research Center said, “It is suggested that BCG administration actually enhances immunity against pathogens not related to tuberculosis,” referring to the case of yellow fever. (Off-target). In short, BCG vaccination may reduce the severity of the new corona virus to some extent. Also, yesterday’s Newsweek’s article by Ms. Yukiko Matsuoka introduced the circumstances around here. 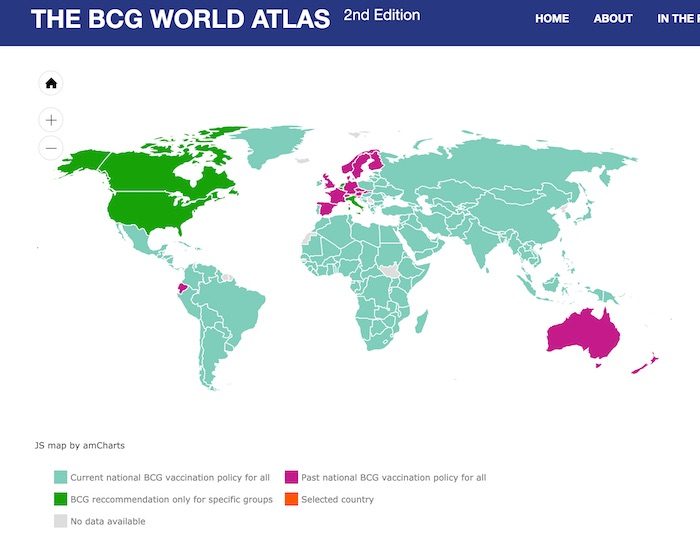 On the other hand, what about other countries such as Europe? Many countries had been vaccinated BCG until decades ago, but the younger generation has not been vaccinated now. Elderly people may have already lost their immunity from the BCG vaccination in the past. If you think so, you can explain why disasters are affecting all generations, unlike Japan.

More interestingly, BCG vaccines use different “BCG strains” in different countries. Japan uses “Tokyo 172-1 strain”, which is higher in titer of WHO international reference BCG than other strains. There are several countries in the world that use the same strains as Japan, but I am interested in the status of the new coronavirus infection in those countries.

It is difficult to deepen this discussions without carefully checking the status of BCG vaccination in each country, but if BCG vaccination has stopped the disease from becoming more severe and the spread of infection to the younger generation has been reduced, the low number of deaths in Japan is the off-target effect of BCG vaccination.

Currently, most 0-year-olds in Japan have been vaccinated with BCG, so there may be few reports of infected or severely ill patients between the ages of 0 and 9 in Japan. We think that the difference in the number of deaths in each country may be explained by the status of BCG vaccination.

If this is a reasonable idea, you should also check whether there is a difference in tuberculin response in people who have become severely affected by the new coronavirus infection, those who have been mild, and those who have no symptoms. Additionally, if consent is obtained by a person who is negative in the tuberculin reaction test (or a negative person and a positive person who is not strongly positive), a method of BCG vaccination may be considered. Alternatively, it may be possible to try first with healthcare professionals who are at high risk of infection and to determine the degree of adverse reactions.

It takes much time to make a full-scale vaccine against the COVID-19. So I think it may be worth trying BCG vaccination as a provisional measure until then.

… I guess brilliant European and US researchers will already be working to confirm the effectiveness. Some progress will be made in a few days, I strongly hope it.